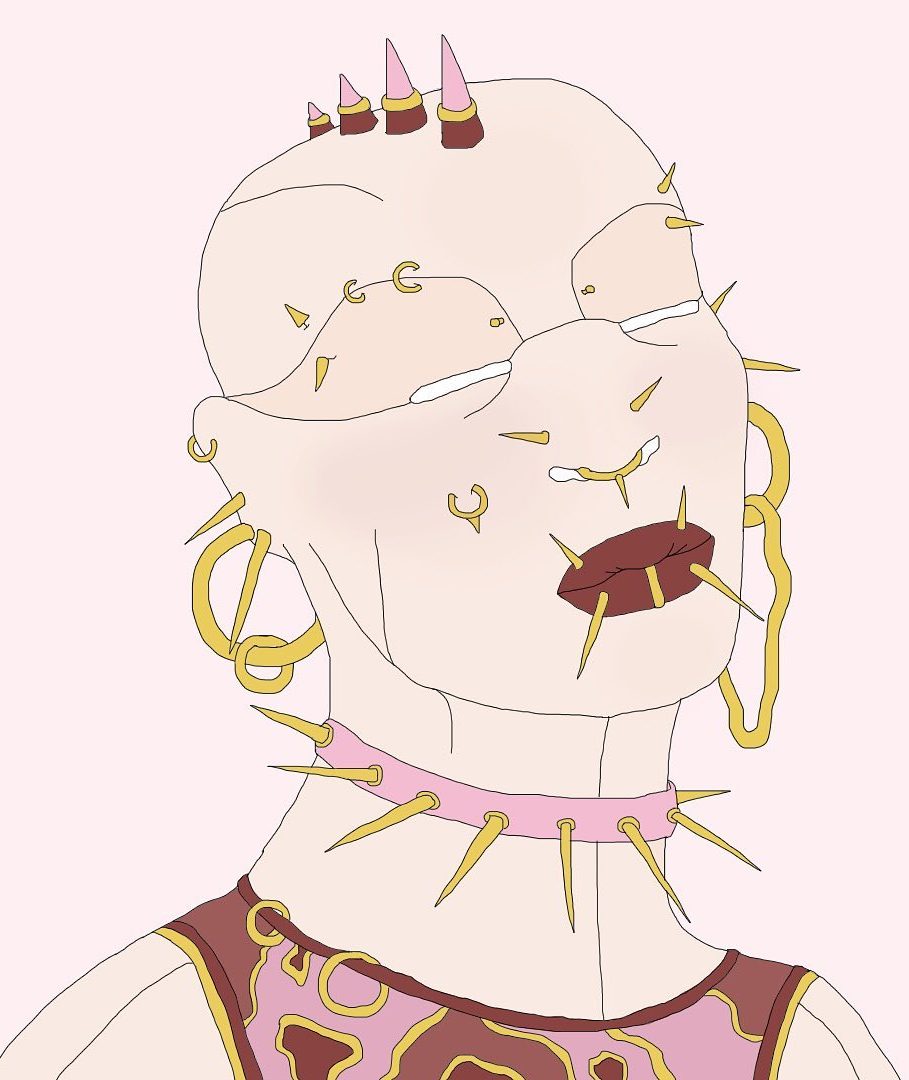 My drawings are like diary entries to me. Publishing them feels vulnerable but also liberating.”

Words by Caspar Pisters, all illustrations by Josefine Aspvik

Berlin based artist Josefine Aspvik (25) got herself noticed first with her casual but effective black and white drawings. In them she offers on point and funny insider reflections on the German capital’s rave culture and gen Z’s digital lifestyle.

Techno raves have been on hold for a while now, and Josefine’s illustrations got more color and stronger statements. She takes on & opens up about mental issues, feelings of anxiety and depression and her hypersensitivity. And is still funny: some of her wineglasses are so Berlin they too have piercings.

One thing that is hard to miss: shoes, clothes, accessoires – hell – even candles have spikes in Josefine’s world. And there’s cactuses, lots of cactuses. So what’s all that stingy stuff doing in the work of a hypersensitive person?

We mail back and forth about it, as she (it’s actually she/they, but she for the moment) is more comfortable writing about her work than talking.

Do you have a lot of cactuses in your house?

“I wish! I’ll start collecting them when I have the money for it for sure.”

You being a hypersensitive person, are all these spikes and thorns signaling: don’t touch me?

“They represent some type of a shield that I know a lot of us have. My sensitivity is quite a mystery to me. Some days I definitely feel hypersensitive but other days I’m completely impervious. Often people don’t really notice my sensitivity. When you live with an anxiety disorder you develop a coping mechanism to make sure nobody steps into that realm unless you let them in. But yes, the cactuses, the jewelry, the spikes are definitely all part of that protection.”

How does that play out in real life?

“If for some reason I don’t feel comfortable, these days I simply protect myself by being straightforward. If I feel like taking my time I just say that. I’ve become a lot more comfortable and open about my struggles to most people.”

How did you arrive at being able to be straightforward?

“At some point I realized it made me feel a lot better. Before, when I wasn’t having a good day with my mental health, I would feel very vulnerable and hide it from my surroundings. Dancing around the truth thinking I was protecting myself. It’s important to do the opposite, to be straightforward with how I feel on my bad days. And to be able to say no when I need to.”

Do the spikes also mean the opposite: a longing to be touched and caressed and cared for?

“Not really. They represent more of a I’m-in-control-of-whoever-enters-my-personal-space, whether that’s mentally or physically.”

What are the upsides of being hypersensitive?

“It makes me think twice about a lot of things. My hypersensitivity is quite physical, if something doesn’t feel quite right I can immediately feel it in my gut. So sometimes I base certain decisions on my gut feeling.”

Some of your recent drawings are about how people react to people who are not fitting the ‘norm’. Are you getting a lot of that yourself?

“I’ve always had a lot of prejudice against me just for my gender expression. I do not look like what society expects me to and I am also very queer, which I am definitely not shy about. Recently I’ve gotten unpleasant reactions from people who are definitely fighting to preserve those norms. It’s almost like they are scared and see us as a threat when they walk past us in the street. It does of course affect my mental health to know that there are people who feel so much hatred against me just based on my looks but I never hold back. They have never managed to change the way I express myself.”

“I was always dressing more masculine out of sight because I was very scared of what people would think. Later on I just stopped caring about the looks and the silent judgement I got because it made me feel worse to walk around in forced outfits and behaviors. So I went for it and didn’t really get bullied for it, thankfully.”

What is it like opening up publicly on your issues with mental illness, depression and anxiety?

“It sometimes feels like I’m writing diary entries when I draw and then share it for everyone to see. It can make me feel a bit vulnerable, which is ok because it is also liberating. The more you casually speak up about mental health issues the more you’ll eliminate the stigma around it. Of course it can feel heavy and scary to talk about these type of things, which is why some people choose not to. I have definitely been through this type of self-stigma myself. But breaking through it and then going online to tell you all about it might help someone to do the same.”

You are about to amp that mission up with Sad Meals, an animation series you recently announced! What can we expect?

“Ah yes! I started to work on it last year and I’m super excited about it. Expect anecdotes and real life struggles of a mentally ill person in order to break down toxic positivity, and to help others understand us a little bit better. Its quite a personal project so I’m for sure feeling the nerves about the release. I will announce the date on my Instagram in the next weeks. Right now everything is still in the making. I first want to finish at least three episodes first.”

I remember being 16 and googling ‘which is the gayest city in Europe’. That’s exactly where I wanted to move”

What do you mean by toxic positivity?

“Quotes like ‘just choose to be happy’, and claims that you should always keep a positive mindset, no matter what. For some that might be encouraging but for people with mental health struggles it’s not realistic nor healthy. It’s kind of giving people false hope. As if you could solve most of your problems by just ‘staying positive’ instead of actually seeking the help that you need in terms of therapy and sometimes medication.”

Will Sad Meals be in black and white as the teaser suggests?

Your work switched from black & white comical observations to color drawings that drive more powerful statements. How did that happen?

“When I first started making comics I was very scared to fully express myself through my art. I felt like using colors was ‘too bold’. My black and white drawings were a reflection of my life at the time. My lines were rough and I remember constantly feeling like I wanted to develop my characters and my style into something completely different and a whole lot more political than what it was. Which is exactly what I ended up doing. But my black and white drawings are an important part of my past as an artist and I decided that there is no reason for me to erase them from the face the planet. So I decided to bring them back and make a nice little mix out of it.”

You grew up in Finland: whereabout and what was that like for you?

“I grew up in a very small town in the middle of Finland called Jakobstad. Most of the people there grew up with Swedish as their mother language including myself. I grew up around a lot of religion which wasn’t always easy for my queerness.”

How did you end up in Berlin?

“I remember being 16 and googling ‘which is the gayest city in Europe’. That’s exactly where I wanted to move, haha. I had been to Berlin on a trip with my art class, it felt right to explore that city some more. I’ve tried living in several different cities but I always end up coming back to Berlin. It has become my home now after so many years.”

A lot of your earlier black and white drawings were reflections on clubbing and the Berlin techno scene: do you miss all that?

“I do miss that, more than ever now that we don’t have access to it. I was very invested in it when I moved to Berlin in 2015. It was pretty much all I wanted to do at the time, haha.”

Has the past year brought you certain insights?

“I am so much more appreciative of certain things. I’ve been in a strange ‘wow, I should have been grateful for what I had’ mood the past year. I’m definitely a lot more into those chill nights at home now, without any fomo. The pandemic forcefully taught me that. And I’ve realized how easily things can crumble, no matter who you are.”

More ups and downs to be expected so stay tuned