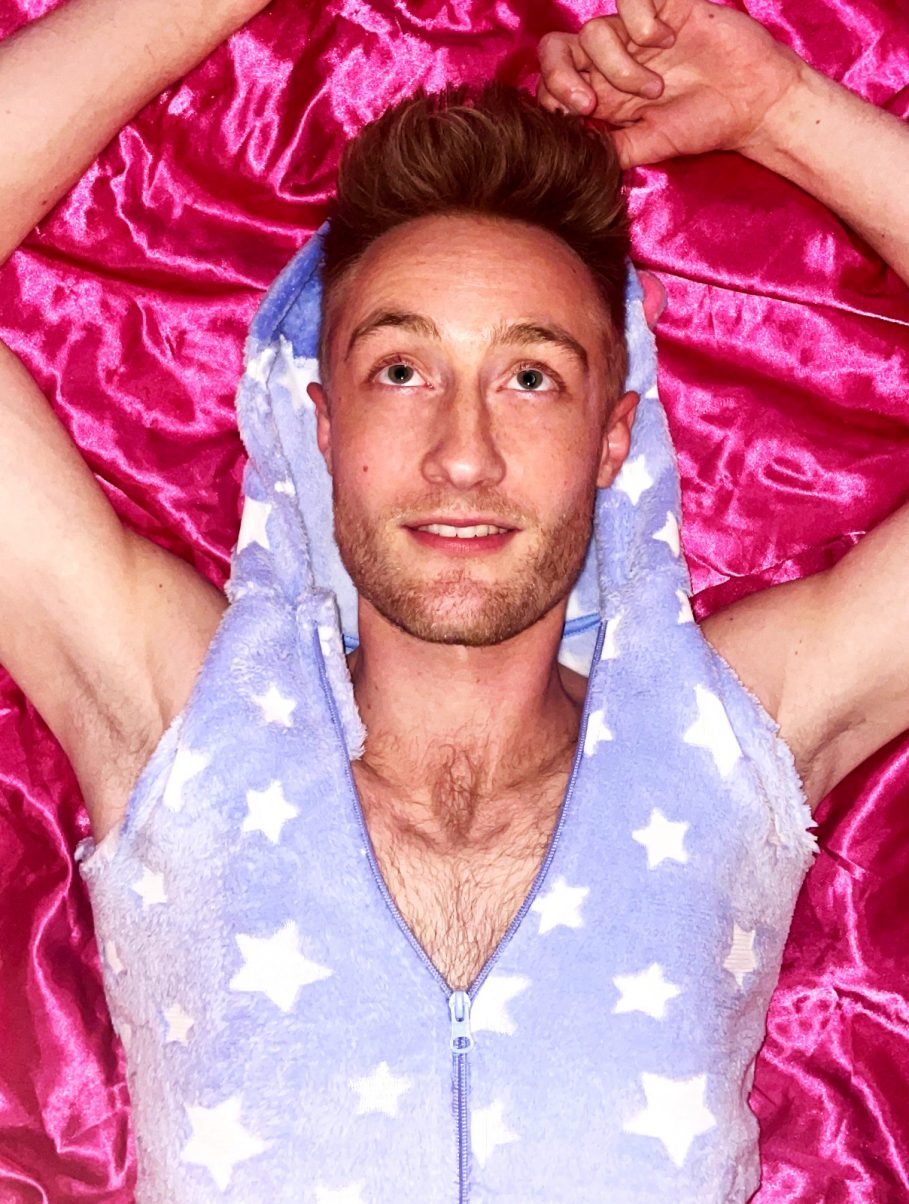 Meanwhile let him turn his debut film Hartenprins, about a young guy learning to love himself, into a series, please.

There’s a small experiment going on in filmmaker Zino Bakker’s kitchen, in the Amsterdam apartment he shares with his cat Miss Kitty Girl. For an upcoming video shoot he cut a three layer orange ‘cake’ out of styrofoam and dressed it up in purple fondant. Now he’s testing how long a yellow colored buttercream tufted on the sides will last outside of a fridge. He also ordered some bags of pills in jolly colors that get sprinkled on top. The – empty – capsules represent prozac or any upper you wish to see in it. These days just a shot of colors, sugar and saturated fat will hardly make anyone happy anymore, now will it?

It’s a lot of detail for a prop that will serve as not much more than a detail itself, but details matter to this 25 year old who graduated from arts academy HKU just last year. And it’s another example of Zino’s talent for setting up a vibrantly popping festive decor and then smuggling a little gloom into it.

Watch Hartenprins (Prince of Hearts), his 25 minute graduation movie. It got featured at Roze Filmdagen (Amsterdam’s LGBTI film festival) in March and was part of Imagine Film Festival in April.

He wrote the script, casted the actors, produced and directed it, wrote lyrics for its soundtrack and was responsible for the elaborate set designs that transport viewers into Zino’s neon colored ‘modern 80’s’ fairytale of a young guy looking for love.

Watch Hartenprins a second time and you’ll see so many little nods, winks and references that you probably missed the first time around.

“I would have a hard time choosing between directing and set design”, Zino admits over a pink cup of freshly cut ginger tea in which he just poured a considerable dose of honey, stirring with a faux golden spoon.

“The fluffy pink and purple stuff that you see in my movie I like in real life too. Glitter, campy classical and pop culture references. The other day I found this perfect pink watering can for my plants. Little things like that can make me genuinely happy. When I design a set I approach it with the mindset of a director. As a director set design is a crucial element in my approach. I tend to go all out on it because it’s what I love to do. The other day I got to shop for free in a thrift store for a production I’m working on. Oh man, a dream come true.”

Hartenprins was your first movie ever?

“I had done a couple short videos more for school assignments but all of them were without dialogue. They looked good but lacked communication. I remember this session where we had to critique each other’s work. My class mates praised me for visual direction but the films hardly made sense to anyone. It was a total eyeopener to me. And pissed me off. Was I too superficial to be a proper director? I decided to have a go at it for my final assignment. Really dig deep and create something that came from the heart. Since I had written the script I found myself very well capable to guide the actors, explain them the different layers and meaning behind the texts and dialogue. I ended up liking it.”

Which is something you realized only at the very end of your studies?

“Indeed. I had actually settled on set design to be my career. It suits me well and felt like a strategic move, too. All my class mates wanted to be directors. There’s not that much budget to get your movie produced in a small country like the Netherlands. So set design is still my focus but I have my own little side projects as a director.”

No biggie at all.

Ignoring the remark: “Several producers showed interest so I’m working on the script and exploring the characters. Hartenprins is very much about the importance of self love. It also shows the domino effect of human hurt, to put it dramatically. This idea of ‘hurt people hurt people’. Philip, the main character, is an insecure young guy that sets out looking for love, using digital hookup apps, hoping to find what he cannot give to himself. Ultimately he realizes that the affection he’s pouring into other people, he should poor into himself, first.”

Is this a spoiler for those who still need to see the film?

“No, not really. It is pretty obvious from the get go. Just as in real life it’s usually not hard to see where another person should stop trying so hard for a moment and tend to themselves a bit more instead. Unfortunately you never get to have that outsider perspective on yourself.”

To which extent is this movie about you?

“It’s not a one on one translation but browse my diary and you’ll definitely find a lot of resemblance. For a lot of the scenes I drew from my own experience. Take Charlie, who is Philip’s main love interest. He is a mix of two of my exes who had this habit of sending out mixed signals that made me confused as well as hooked on them. At times it felt like they were deliberately trying to shrink my self esteem. I realize they were dealing with their own issues. I still feel empathy towards them even though stuff they said to me at the time has damaged me considerably.”

I have a hard time dealing with getting older. Every day I drift further away from being that fresh new 18 year old butt”

What kind of stuff?

“One of them said that people only found me attractive because I was young. I was 19, he was 30. I’m not even sure if he really meant it but it stuck with me. Many times, out of nowhere, it will pop back up in my head. Which is how you know something has affected you. It gave me a fear of getting older. I’m 25 now, which means I’m about to drop out of the age range in which people will like me.”

“Exactly. Of course I broke up with this guy a long time ago. But what an asshole thing to say to such a young kid. It was probably his own insecurity projected onto me. But it has left me with a complex of feeling the need to be young and bubbly forever just because one jerk made a nasty remark.”

It’s interesting how trauma is generally linked to big issues like parents divorcing, an accident or physically violent situations. Often one casual little sentence can set you back for two decades just as easily.

“It set me up with a strong FOMO feeling. The younger I am, the more people will like me, the more fun experiences I get to have. If I don’t use my time to its fullest right now, I might regret it later. ‘I wish I had fucked that silver daddy when I could’. I would be so bummed out. When a guy tells me he’s only into young guys it confirms my thinking: see…”

I don’t even know where to start addressing this.

“I know. But it’s a restlessness that is there and I have a hard time dealing with it. Every day I drift a bit further away from being that fresh new 18 year old butt.”

In a previous conversation you told me that your mom got quite emotional when she watched the movie.

“It was obvious to her that I had based the main character largely on myself. He looks quite unhappy and that got to her. Which then got to me, so we were both crying. But it was a beautiful moment. Because I could show her without having to tell her. She watched the film a couple of times by herself afterwards.”

How is your relationship with your mother?

“Very well, we are really close. I tell her just about everything that’s going on in my life and she does the same.”

“GHB. That’s something I don’t bring up, even if she kind of knows I do drugs every once in a while. She and her friends joined me to Milkshake once, which is this massive queer dance festival in Amsterdam. I was prancing around in my tiny shorts and she remarked: ‘Your pupils are slightly bigger than on the day you were born’.” (Laughs)

“No, it’s how she raised me. I get to try everything as long as I wasn’t being secretive about it. When kids start to sneak out of the house and hide stuff from their parents, that’s usually when things go wrong.”

At which age did you start experimenting with drugs?

“When I was 22, with the guy I was in a relationship with at the time. After we broke up, all of a sudden almost all conversations on hookup apps were about drugs. It had been offered to me before but I never paid much attention to it.”

I’m better at spotting a dickhead early on. But the tendency to go for the toxic type is still there”

You had become receptive of it?

I noticed your film version of Grindr – Seekr, and again: so elaborately detailed – shows men as well as women in the grid.

“I had wanted to express this aspect more in the film. My idea was to create a world in which love is just love. Gender isn’t an issue, it’s about love and attention and sex, and you go for it there where it’s offered by whomever. Which may sound very rosy but there’s a definite dark side to this film. Since love or the craving for it can be so dysfunctional often.”

Is this dark side sourced from your own experience, too?

“Well, yes. The sad moments, the negative feelings, I have those. And it’s what the film is based on. This idea of self love is such an easy thing to say but so hard to accomplish. At the same time the film is very colorful, rich in fantasy and fairytales, which is also a side of me. And it’s something the world could use a bit more of.”

Has your choice of partners improved?

“To an extent. I’m better at spotting a dickhead early on. The tendency to go for the toxic type is still there. Just this morning I was chatting to a guy. He was quite arrogant in his communication, as if I was auditioning. He wanted to hook up and added that he was very critical on who he wants to fuck. Oh, sure. But it was a red flag for me. Issues.” Laughs. “So, have a nice day! A year ago I would have jumped on this guy.”

Are you getting better at self love?

“I think so. I’m milder towards myself, less judgmental. Making this film actually helped. It was amazing to experience that it really touched people. Getting this kind of feedback about something that isn’t related to my age or how I look feels sustainable. It helps easing that anxiety of getting older. I’m talented, I have a sense of humor, I’m creative, I’m caring and I’m kind to people. And none of that will fade away.”

Keep up with still bubbly, pink and glitter – and a Hartenprins series-to-be.