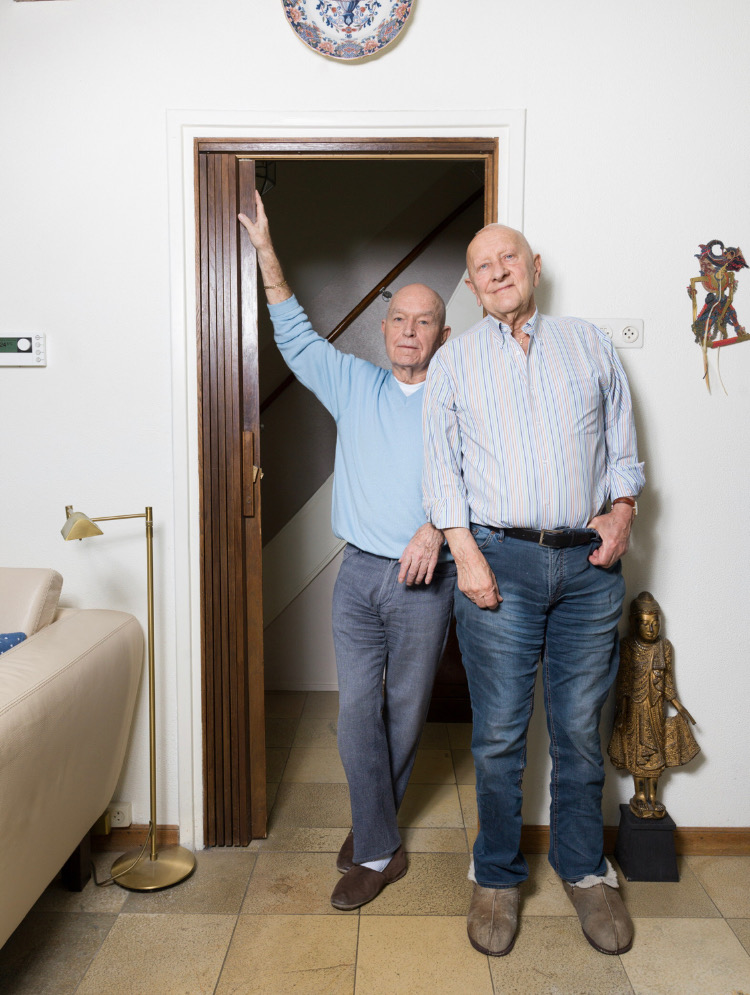 YES THEY DO: the very first gay and lesbian couples to ever officially marry are still going strong

Pictured above: Louis (left) and Ton

Exactly twenty years ago today, at the strike of midnight, the mayor of Amsterdam announced these same sex couples officially married. So how are they doing?

Read this story in Dutch in Het Parool

“That’s because you are constantly touching everything. Wait, no, it’s working now.” We hear Gert Kasteel (59) and Dolf Pasker (61) bickering before we see their image through Zoom. Gert explains that Dolf is somewhat digitally challenged, which Dolf acknowledges wholeheartedly. And Gert adds that they are the quarreling kind of couple. But they are a couple, still, twenty years later.

All things considered they are pretty well off in these times they state, though they enjoy complaining a bit nevertheless. Wouldn’t it be lovely to finally be able to spend a day again pampering in their favorite luxury spa. Last year they devoted themselves to shaping the garden of the new home they had just moved into. Constructing a henhouse, digging out a pond – it almost left Gert strained at one arm. But they did all of it by themselves, where in their neighborhood they see vans of gardening services come and go.

That Dolf can announce on Brazilian TV he and Gert are still happily married twenty years later is of considerable importance, he realizes

In retrospect, the marriage they entered into twenty years ago has gained more meaning with time, Dolf says. Back then they were already ‘registered partners’, covering their bond legally for most part. Marriage was to complete that proces.

They had not expected to pass a hedge of camera crews from all over the world walking into the town hall where they spoke their vows at the strike of midnight April 1st, 2001, when the institution of marriage in the Netherlands opened up for all human beings.

The journalist from BBC asked questions warm and friendly, Dolf remembers. The Italian news crew was definitely more reserved. The Polish camera crew had a hard time hiding a sense of disapproval. That this year Dolf gets to announce on a Brazilian TV channel that he and Gert are still happily married twenty years on, is of considerable importance, he realizes.

Dolf remembers how at the time both their fathers were fine with their son being gay. But both dads feared life was going to be tough on their kids. Gert’s father – who grew up at a time when you could get fired because of your sexual orientation – even had some money put aside, just in case. Dolf is visibly touched when he connects with that memory. “Probably because I realize it turned out okay. We’re not outsiders anymore as much as before just for being gay or lesbian.”

Twenty years is a bit of a non-anniversary, as far as Gert is concerned. Five years from now, we are more than welcome to catch up with them again. Gert: “If getting old is given to us, we will get old together.”

The other day Hélène Faasen (54) overheard a conversation between students at the school she works at. She realized they were talking about her, discussing that Hélène is one of the first women in the world to ever officially marry another woman. “This was not possible before”, she heard them say.

In fact, Hélène and her partner Anne-Marie Thus (51) were the very first lesbian couple in the world to do so. Though this notion in itself is not of relevance here for Hélène. What moved her was experiencing that there is now a generation of people growing up to whom it is self-evident that lesbian and gay couples can marry. That there once was a time that this wasn’t an option, is stuff they read about in history books.

That same sex couples couldn’t marry before, is stuff a new Dutch generation reads about in history books

Their own children are now 20 and 19 and the couple (they met each other on December 5, 1998, a successful set-up by mutual friends) has moved from Amsterdam to Maastricht. There, in the south of the Netherlands, finding themselves surrounded by nature when they walk their dog is only a short distance.

Marriage isn’t about a certificate and a set of rings, and marriage itself isn’t going to make you a happier couple, Hélène says. It’s about agreeing to that extra effort, even when things get more complicated: “Not that there has been a lot drama, not at all. But we do have two children who went through puberty. And as with all relationships, sometimes for a moment you like the other a bit a less. Sometimes a dishwasher isn’t cleaned out when it was supposed to.”

The outside world takes their relationship more seriously now, the women notice. Another thing that has changed over the past two decades is how people respond. Comments like: ‘Oh yes of course, two women marrying, that’s also possible nowadays’ are much less frequent.

At the time Hélène had not expected that by now same sex couples can marry in 29 more countries. Anne-Marie thinks “things could have been better” in that regard, and notes that worrying developments are happening that she had not expected either twenty years ago. Such as Poland and Hungary announcing ‘LGBTIQ+ free zones’, countries that are part of the EU.

The attention that comes their way, at the 20est anniversary of them exchanging vows, is an opportunity they use to express worry. It is way too early to sit back and congratulate ourselves on how progressive we are here in the Netherlands, that state. Among other things, a solid arrangement that deals with the rights of all parents in situations where kids have more than two, still is not in place, the ladies point out.

Hélène: “I remember very well that on the day we got married in Egypt a group of gay men got arrested for having a party on a boat. There is something very cynical about this. Twenty years later we are asked how things are for us. While probably no one at all is wondering how these men are doing. Our wedding wasn’t just a fun party and, hooray, all is settled now. No, too much stuff is going wrong, still.”

Both were thinking the same thing when complications because of Corona worsened and Ton was helped into an ambulance at the end of March last year: that’s it, we will not see each other again. But four days later Ton (92) was back home. It hasn’t been easy though. He still isn’t as fit as he used to be. Certainly at first crawling back up was hard. Louis had to pull Ton out of bed, he couldn’t get up by himself. Ton would brush his teeth and shave sitting in the bathroom on a stool. He needed help putting on socks and tying his shoelaces.

Ton is usually the one who cooks – after 56 years of being together, the division of roles is clear. Neither of the guys remembers what they ate in these first weeks and where it came from, but somehow Louis showed up upstairs at Ton’s bedside with plates of food. “Surreal” is the word Louis uses to describe that period.

56 years ago a friend new exactly the person to cheer Louis up. And that was Ton

Right now though, Ton is comfortably seated in the corner of their sofa, telling plenty stories about their past. This that cafe that they frequented a lot – even if its name won’t come to mind. The entrance of the bar had a statue of a white owl above it. Whenever a straight person would enter, a light inside of it would switch on and everyone knew they had to be somewhat mindful of their behavior. “Homosexuality at the time was still a criminal offense,” Louis explains.

Ton Jansen and Louis Rogmans met on November 6, 1965 at COC, a social salon for queers that now is the oldest still active LGBTI rights organization. Louis’s mom had just passed away; his good friend Mans figured sitting at home feeling sorry for himself wasn’t going to lift his mood. Mans knew exactly the right guy to cheer Louis up. And that was Ton. “Actually, I still cheer him up to this day”, chuckles Ton.

Being old, neither of them enjoys it much. Together they are 175 years of age, Louis calculates with a flair of drama. So many friends have already passed away. Before, when they had a birthday to celebrate, their house filled up with people, providing enough beer was a challenge. Now Corona doesn’t even allow them to go for dinner somewhere, find themselves surrounded by some people for a bit. They miss it a lot.

Louis: “You are this young guy, until one day you look up in the mirror and see it: I am an old bastard. I can’t even pretend that I’m young anymore. It happens so very sudden.”

Ton thinks that people shouldn’t spend much time looking in the mirror anyways. To Louis: “You are quite a beautiful one. You still have a nice and pretty face. Besides, if you are simply healthy, you already are beautiful.”

Dying and how things will be if Ton should no longer be around, Louis has it on his mind quite a bit. Even if it isn’t obvious per se that Ton will be the first one to go. But if so, Louis would prefer to join him right away.

“We could jump off of the roof of the Hilton hotel together”, Ton suggests. But Louis doesn’t have the guts to do that.

There was a fourth gay couple that married on April 1st 2001. Days before they were supposed to celebrate their ten years anniversary, one of the partners deceased. The widower chooses to not engage in publicity anymore. Twenty thousand same sex couples married in The Netherlands since 2001.