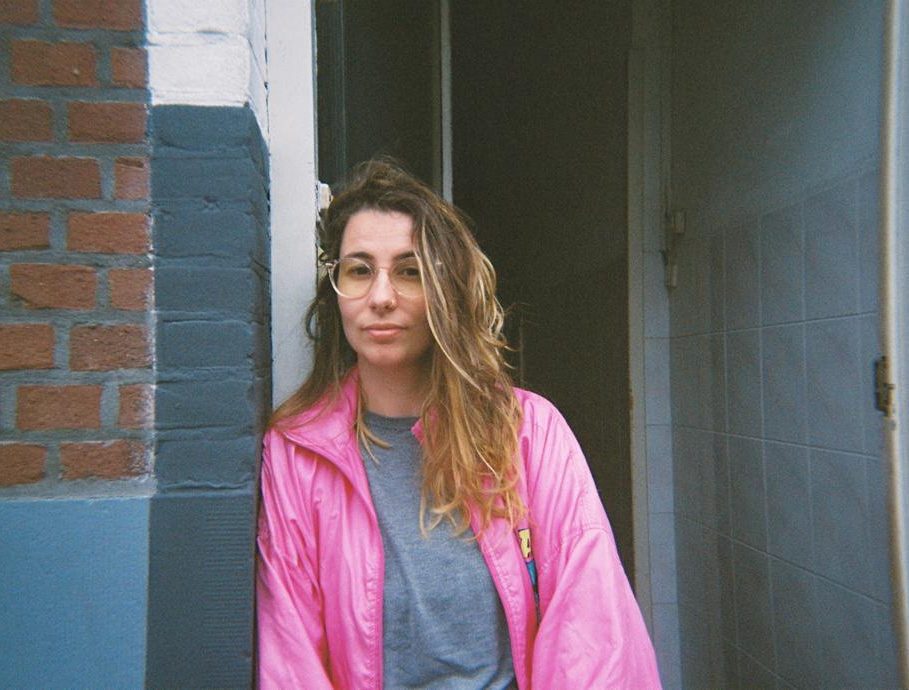 Singer ALICIA BRETON FERRER says everything is going to be alright, kinda

Her punky electro track No Suicide in the Kitchen helped her pull through. Perhaps it works for you, too.

On the outside things were looking really good for Alicia Breton Ferrer (32, living in Rotterdam, Netherlands) at the beginning of 2020. The multi-instrumentalist and singer was playing in not one but two bands, accumulating up to 50K streams for a track on Spotify. Bookings for gigs at Summer festivals kept coming in.

“Performing provides fuel to my life”, Alicia says. At age 18 she realized music is what she wanted her life to be about. Getting her drivers license she was invited to be backup drummer for a band. She chauffeured the team through Europe where they performed in small venues and squats across Scandinavia and the UK.

Alicia: “It felt so good, I knew that this is what I needed to do.”

However, when in March last year Alicia performed with ‘indie noise stature’ The Sweet Release of Death (the other band has an equally cheerful name: Neighbours Burning Neighbours, a ‘post-punk newcomer’) at a festival, hand sanitizers had been put up at the entrance.

Alicia: “I remember how we were kind of joking about it at the time, still holding on to this idea that corona was just a flu. A week later everything got shut down.”

We’re having a chat over Zoom. Alicia lives by herself in Rotterdam, with cat Iggy. Every once in a while during our conversation someone passes by in the frame to get something from the kitchen where she’s seated. “I like having people around”, she explains. “Travellers sometimes stay here for a while, often other musicians.”

Music helps me to get by psychologically, even if it can’t sustain me financially”

Asked if she can live off her music her answer comes with a somewhat sharp determination.

“Yes, I can live off my music. Typically this question is asked to inform if it generates enough of a financial income to get by. If one thing became apparent over the past year it’s that this is not what really matters. Music helps me to get by psychologically, even if it can’t sustain me financially.”

On her forthcoming album Headache Sorbet, scheduled for release on cassette (!) and streaming platforms on April 23, Alicia invites us in into her pink filtered little universe of distorted experimental noise. A gritty party for one, creeping up on you claustrophobically, providing a punky cathartic relief.

The record largely came together in her kitchen and living room where she herself came close to falling apart.

Alicia: “There were these moments when I absolutely didn’t know what to do with myself. I would put my head on the tumble dryer as it was spinning to calm me down. (laughs) It was the only thing closeby that had a somewhat soothing effect.”

It resulted in the second track of the album that just yesterday got an official release: No Suicide in the Kitchen.

The title has a quircky ring to it but just to be sure I’m not ridiculing a grave situation: how dark of a moment was that?

Alicia: “It’s not to be taken too seriously indeed, even if I was absolutely floored at the time and making music was really the only thing I was capable of. Depression and feelings of melancholy present themselves in my life at times, but I’ve generally managed to give it a twist and appreciate the absurdity of things. I dealt with depression quite a bit in my teen years. Lockdown resembled that feeling. Being stuck inside, isolated and all by yourself without being able to escape from it. The first couple of months invited in financial stress and general feelings of insecurity. Music is what pulled me through.”

The first single was dubbed Having Fun and I assumed the title is riddled with sarcasm. But then I realized: it probably was fun to put this album together.

Laughs: “That’s exactly it. A friend had suggested we start an electro pop duo. At one point I was cycling through the city, upset and angry over a relationship that wasn’t working out. A couple of lines started to repeat in my head and when I arrived home I dug up an old Casio synthesizer I had laying around. I wrote Nosebleed just for the sake of it, the first track on the album. It has me summing up a bunch of apologies for stuff that you don’t really need to apologize for. Creating music all by myself was a new experience. Usually it comes together while working on arrangements with others. But there were no other people around. It required some adjusting but at some point I switched on and things started flowing. All of a sudden I was able to fly all by myself. It felt very liberating.”

You got to know new sides of yourself?

“Absolutely. Corona brought on a burnout but I had that coming anyways. The succes with the bands was great but I already felt like a zombie. The prospect of a Summer packed with performing was quite daunting. I was forced to not do anything at all for some time and that was good. Picking myself up after that felt like learning to be a person anew. It made me realize how I had been stuck in a grid, doing al kinds of things because I was supposed to do them. There are all these rules you try to live up to without even thinking about it much. Also if you’re working in the arts, it’s important to let go of all of that. What is going to keep me alive mentally, rather than financially?”

The album shifts into a seemingly more hopeful final section with Everything Is Going to be Alright, in which Alicia uses voice message samples of affirmations she and the person she was long-distance seeing at the time were sending back and forth.

It’s where cat Iggy comes in on the record, too. Not only does he have a track named after him, Iggy is featured on it with vocals as well as some improv percussion. In the video for Having Fun he provides a brief cameo that nevertheless feels opinionated and of essence.

Alicia, laughing: “Iggy has a peculiar awareness of whenever the microphone is on or when filming is happening, he will go over and start making noises. He sabotaged a few recording sessions. I had wanted to take that track in a different direction but eventually I gave in: you do it. He clearly wanted in on it.”

The album ends with Delete. Is that referring to the pandemic?

“I like that reference but to me it actually is about letting go and allowing the other to be who they are. I wrote it after the long-distance romance ended so it’s very much a broken heart song. There is an openness in it, too, a surrendering: everyone is actually doing precisely what they are supposed to be doing. So allow yourself to take up the space that you need. It was the last track that I wrote, it completed the journey. Creating this music felt good. Things that I couldn’t find words for, feelings that I wasn’t sure how to process, they are on this album now and I can move on. It’s what’s wonderful about creating music.”

Keep up with Alicia Breton Ferrer (she’s a photographer, too!) and pre-order Headche Sorbet