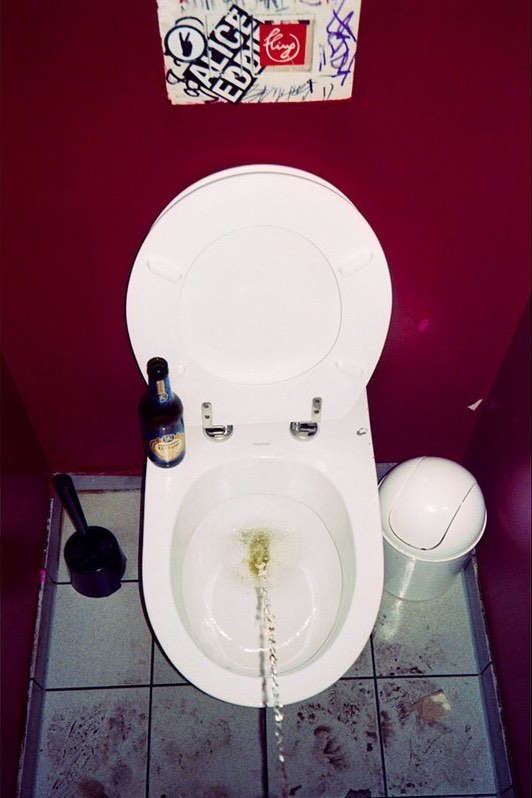 Pictured above: Florian is going for it at Paloma Bar

The German photographer (36) pays homage to Berlin nightlife in over 150 gritty pics of not-so-clean toilets: “Lucky for you pictures don’t capture smell.”

Words by Caspar Pisters, all photos by Florian Reimann

Florian, that is a beautiful bunch of dirty toilets you collected there.

Laughs: “I find it quite interesting how clean toilets are elsewhere. In Berlin they are a bit fucked up. During my photography studies I needed a subject for a project to work on. In my mind it had to be something really big and important but a professor advised me stay close to what I do in my life. I like nightlife a lot and I love to party. As a joke I started taking pictures of me peeing in these toilets. People responded so strongly to those photos, the controversy motivated me to continue the project.”

Why are reactions so intense?

“I guess because being inside of a toilet is usually a private affair.” Laughs: “In nightlife it can be a different thing I guess, when you are fucking on a toilet, or drugging or I don’t know what. But for most people a toilet is confusing as a subject so they would react a bit repulsed. Later on the typology of the photos started to emerge. The repetition of the images made it something more than just pictures of toilets. It started to tell a story about the spirit of Berlin nightlife.”

Do you have to feel inspired by a toilet to whip out your c… amera?

“I like it best when a toilet looks terrible: very dirty, tagged by graffiti, toiletpaper everywhere, drug bags on the floor. When I take a pic in a pricy bar there’s not much to see, it’s usually quite slick. I included a few of those in the selection too, because they add a contrast. One of the first pictures that I posted on my Insta is taken at Zur Fetten Ecke. Lucky for you photos don’t capture smell because that was horrible. I think nobody cleans the toilets over there, ever.”

That one got you over 400 likes, the biggest hit so far.

“Several people actually bought this picture, already five or six out of the US alone. It had me thinking: people are spending money on this, that is so cool.”

How many pics have you made altogether?

“About 150 up until now? I’m looking into doing a book to finish the project. I’ve been talking to several independent publishing houses but I think I’ll self-publish it via crowdfunding to keep the price low and my creative freedom high.”

Can I compliment you on your peeing? You display this nicely curved steady beam and it is a constant element in the composition.

“Are you asking me how I am doing it?”

I wasn’t but please explain.

“I only take a photo when I have to pee. I’ll have a drink or two so that the pressure is high.”

Will you take a pic even when someone is standing next to you?

“At the beginning I definitely never did that. I don’t want the other guy – it’s usually a guy – to think I’m taking a picture of him peeing. It happened twice maybe. In both cases I had gotten there first. It is a bit awkward because I’m standing further away from the toilet than someone would usually do.”

You need some distance?

“Absolutely, otherwise the camera wouldn’t capture the composition like this. I just start to pee and I take a picture with my analogue camera. Not a smartphone, because the quality wouldn’t be that high. I need a proper flash.”

So only once you start developing you see the result?

“Yeah, but I know what I’m doing. I’m used to shooting with analogue camera’s, I can rely on my technique.”

Haha: confident is the word I was looking for. The caption for one of the pictures mentions you had a Tinder date there. How did that go?

“Okay, people could mis interpret: the date was at this bar, not at the toilet. It went well, it became a thing and we had a really good time together. But half a year later she moved abroad and we split up.”

Make sure to also browse his beautiful diary series Paradies, which is German for – oh, you guessed it – Paradise. It refers to Paradies 200, which is the name of a now non-existent cheap and beloved analogue film from a German drugstore.