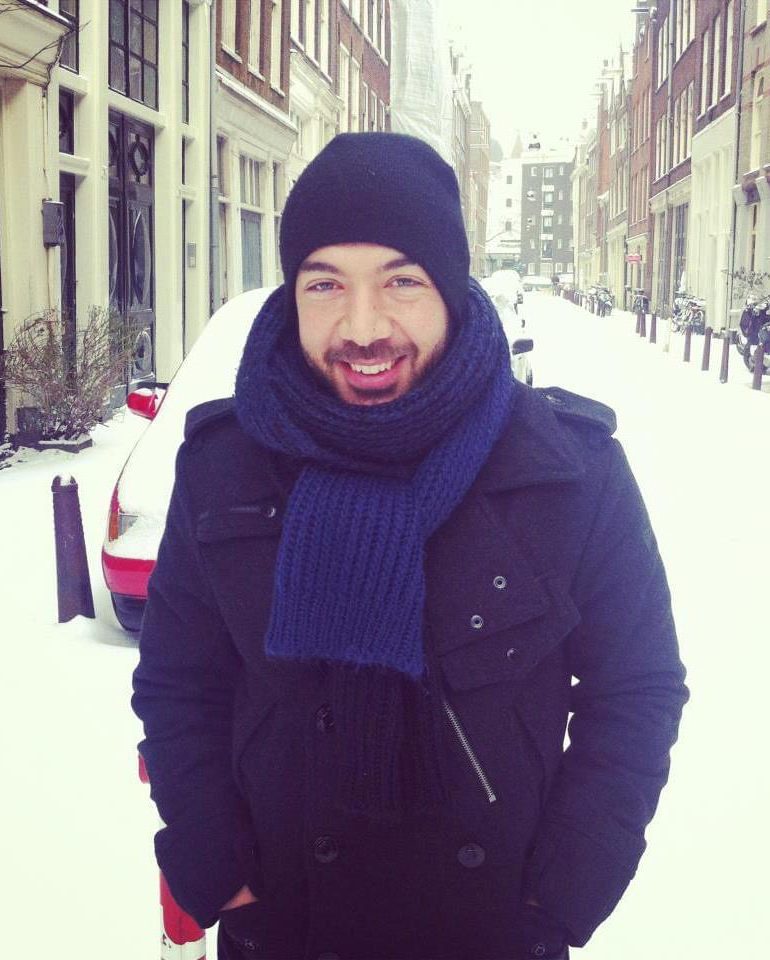 The crazy story of how AHMET moved from Turkey to Amsterdam, exactly twenty years ago

The future reader said: I only see water, how can people live there?”

“We met at a square in Adana, the city in Turkey where I grew up. I was 17 years old, the internet was still in its early days.

We hadn’t exchanged any pictures at all like you would nowadays. But he had described to me what he looked like.

I was standing there waiting for him, looking around and scanning who he could be, terrified for what was going to happen. Until I saw him, confidently walking towards me. An attractive guy.

Clearly you could see some femininity as well and I remember thinking: oh my god, am I doing something crazy? Shall I walk away? All these thoughts are running through my mind until the moment he shakes my hand.

I panicked initially. I absolutely didn’t want to interact with any other Turkish gay person”

We had first started talking on an international gay chat channel. I would always make sure to remove ‘Adana’ out of my nickname. But this one time I forgot and a message popped up: ‘Hi, how are you? I’m also from Adana, now living in Amsterdam.’

I panicked initially. I absolutely didn’t want to interact with any other Turkish gay person. It was difficult for me to even get my head around it: someone who is gay, from Adana? Living in Amsterdam?

But we started chatting and he seemed nice. He suggested that we meet up next time he would be in Adana to visit his mother. We remained in contact through email and now the moment had arrived.

On a bench we sat down and we talked. About his life and mine, about my university studies that I had just started, about figuring out my sexuality.

Who was this guy

An hour into the conversation he said: ‘You cannot live in this country. You will suffer. I can see you, you will always be unhappy. I’m going to help you to move to Amsterdam.’

I didn’t take it too seriously. We had only just met, my diploma wouldn’t be until another three or four years. I had never been to Amsterdam. And who was this guy anyway? But I could tell that he meant it. He added: ‘All that I want from you is that you graduate and have your diploma.’

That night I couldn’t sleep. I was thinking about what the consequences would be if I should move to Amsterdam.

My parents said no, absolutely not. You can move anywhere in the world but not Amsterdam”

We kept communicating over the years. I could share with him what was happening in my life, my emotions, about Uhmut, a guy in Istanbul that I met at some point.

Our connection grew stronger, he became my mentor, giving me advice. He was older and so much further in life than me, a really smart guy with a deep understanding of emotions.

He came to Adana many more times. I met with his mother, who is this very traditional Turkish lady with a funny specific accent. She and I had a really good click, through the years we spent a lot of time together.

Until finally I could announce the date of my graduation: I would have my diploma.

He replied: ‘It is time. I will send you some papers. Go to Ankara and apply for the visa.’

That was a bit of a thing. My parents didn’t know about my plans, so I had to make up an excuse to go to Ankara.

I would get the visa within two months but then I learned I had failed one of my exams. It would take six months before I could do it again. I started to stress out, because I was going to lose the visa and lose the opportunity to go to Amsterdam.

I realized I had to inform my parents. I decided to talk to my sister first. She shares with me everything and I was afraid that she would abandon me if I kept secrets for her, including my being gay. So I told her.

She started crying and hugged me, and said how much she loved me and that she would always be there for me.

That same night she helped me talk to my parents. Not about being gay, but about moving to Amsterdam.

Their answer was: no, absolutely not. You can move anywhere in the world but not Amsterdam. Whenever anything about Amsterdam was mentioned in Turkish news, images of the Red Light District were shown. Amsterdam to them meant prostitution and drugs, haha.

It became a really big fight. For two weeks I didn’t speak to my parents. The air at home was so thick that after university I would go straight to my room, sometimes without even eating.

Until one day I came back home and my mom was sitting with a neighbor who had been to a future reader.

The woman’s face changed, her eyes were open but her gaze went completely blank

My mother said she wanted to visit this future reader too. So I said: fine, go.

But, no, my mother wanted me to go with her because she wanted to find out about my future.

That upset me. Our neighbor had just told some really remarkable stories and I was starting to stress out: if this person is really that good then I am screwed, haha.

But my mother was determined. She said she would go there anyways with a picture of me and my date of birth. I decided it would be best to go along.

I remember walking through the corridor of the house, at the end of it was this lady’s room.

We entered. A regular looking woman of probably almost thirty years old. She invited me to come sit with her at the table. My mother followed me in but the woman protested: ‘What are you doing?’

My mother replied: ‘I’m gonna sit with you, I wanna hear everything.’

The lady protested: ‘No. This is between me and him. You go outside and close the door.

I sighed with relief, haha.

Her hand started to move on the paper, but not normal. Too fast and almost mechanical, as if it moved by itself”

The woman put pen and paper in front of her. She looked at me first and then up at the ceiling. Her face changed, her eyes were open but her gaze went completely blank.

Her hand started to move on the paper, but not normal. Too fast and almost mechanical, as if it moved by itself. It was in an old Arabic or Farsi language, not any current Arabic language that I knew. And in spite of looking at the ceiling, her handwriting was beautiful and in perfect straight lines on the paper.

She turned to me again and her gaze changed back to normal. And she started looking at what she had written, circling parts of it when she started talking.

I was in complete shock, because she mentioned names and dates. Such as that guy I had been seeing in Istanbul: ‘Who is Uhmut? He is your good friend. You told him you want to stop your friendship with him?’

This was true. I had just told him we couldn’t continue seeing each other, because I was moving to Amsterdam. She told me he would contact me in two weeks because he didn’t want it to be over. He did exactly that.

She said: I only see water, how can people live there? But I see your future there”

She told me that she saw another man close to me, she mentioned my mentor friend’s name. And she told me that he’s going to help me a lot. ‘I don’t see your future in this country’, she said. ‘I see a place, I only see water.

I don’t understand what this place is. I only see water, how can people live there? But I see your future there. You are really worried that you won’t be able to make it. All your worries are not necessary. Everything is going to happen exactly at the right time. Your future is not in this country.’

She continued: ‘Why are your parents so angry at you?’ Frustration started building as she read more and more: ‘Why are they doing this to you?’

Until she stood up and stormed out, into the room where my mother was sitting. She started screaming at her: ‘What are you doing to this child?! Leave him alone! He will do everything himself, you need to stop trying to stop him!’

I was in complete shock. And my mother was in shock. But the lady repeated to me: ‘Don’t worry, everything is gonna happen exactly at the right moment.’

That night the fight with my parents was finished. I assume my mother told my father what had happened. They said me that they wanted to support me: ‘If you really wanna do that, it’s fine. We’re not angry with you anymore.’

I still was worried though. The visa could arrive any moment but I had four more months to go until my diploma. Without it I would be nothing in Amsterdam.

But the visa got delayed. I called the consulate: still delayed. I kept waiting. Delayed again. And again. Until the week arrived in which I had my exam and I learned that I passed. And there it was, in the same week: a notification that my visa was ready.

It hasn’t been easy

Two weeks later I ended up here, in Amsterdam, now exactly twenty years ago. What an amazing time I’ve had, meeting amazing people, traveling around the world.

The past few years haven’t been easy. I lost myself in a depression for some time, and I had lost my job and my closest friends by the time I found myself again. Then corona happened and finding work right now is so hard. I’m struggling to hold on to my apartment.

Being in Amsterdam feels like it was meant to be”

But in all these years in Amsterdam I can still go outside, walk around and stare at the canals, the houses. See the little balconies, the plants and flowers climbing on the facades. It looks so beautiful and I admire it so much. Being here feels like it was meant to be.

Telling you this story now, had me flash those words through my mind again: everything will happen at the exact time it needs to happen.

That doesn’t mean I sit on my couch and wait for things to come my way, no. But I do tell myself not to worry. And I remind myself one more time how it all started and how important it is not to give up. I did it once, I can do it again. I build my life from zero if I have to.”