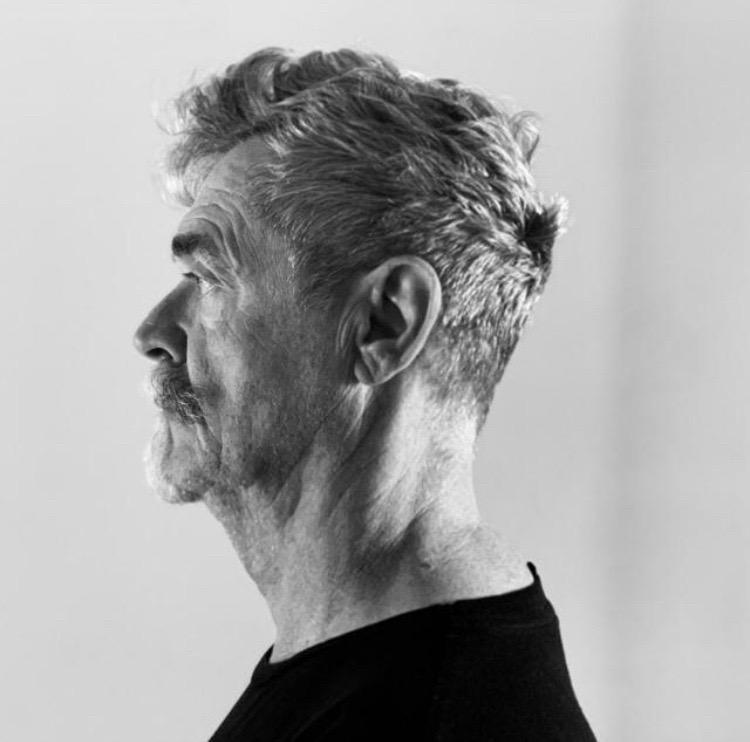 I felt like wanting to learn new things again.”

An outside spiral staircase takes you up along the facade of the building where Frans Franciscus’ studio is situated, a wisteria that creeps over the banister leads the way. The bright and spacious atelier is at the third floor of a large former squat complex that consists of several buildings dedicated to all kinds of creative practices.

Inside of the work place Frans’ ceramic characters and paintings great me with their silence, and with their slightly surreal spirit. Frans himself, finally, is all the way in the back of the studio where he is at his desk, involved in some administration.

About five years ago the established Amsterdam artist switched from mainly painting – dense and elaborate classical images, stories with a modern twist – to mainly ceramics.

“My studio hasn’t been the same since”, Frans (62) explains. “The three dimensional objects create such a different effect in athmosphere.”

“Yes, and it’s definitely filling up. I remember stacking the sculptures all away recently, because sometimes I just need the space to be empty. Somehow they have found their way back into the room, staring at me. I’m not entirely sure how that happened.”

As he does whenever someone comes over to visit his studio, Frans selected a painting that he thinks might be somehow fitting his visitor. It is part of a series of portraits called Scars, one of them shows a handsome black young man in an Adidas vest holding a golden crucifix, one eye bruised and bleeding.

What happened to this guy?

“Could be lots of things. I have my own thoughts with it, but as soon as I walk away from this image the next person will have to decide for himself what is going on.”

He started doing ceramics when he felt – after thirty years – that he had painted what needed to be painted, Frans explains. “I ran out of ideas. I felt I had plateaued, I wanted to learn new things again. I assumed three dimensional art was going to be easier than painting, but as it turned out there’s quite a bit of technique to it. It’s one thing to shape an arm, it’s another thing to keep it erect in the exact position you want it to be.”

Frans got invited into two subsequent artist residencies, the second one taking him to Jingdezhen, the porcelain capital of China, where he spent three months developing his technique. A core inspiration for his work is a stunning self portrait bust by 16th century Dutch sculptor Johan Gregor van der Schardt (1530-1591, the work is on display in the Amsterdam Rijksmuseum).

Frans: “He uses oil paint to finish his sculptures in stead of ceramic glaze. It gives an incredible effect. I figured that if a 16th century dude can get away with doing that, I can do it too. Later I started combining ceramic glaze and oil paint, which makes the glaze pop out in a really cool way.”

Polyamory is becoming more accepted but it has its particular challenges, society definitely isn’t adapted to it”

Biblical and mythological themes have long been his inspiration, Frans says. “Without actually having much knowledge about these subjects, I must admit. I’ve picked up a lot along the way. I was hardly interested in art from before 1960 when I started out. That changed when I studied in Berlin for some time in 1984, ’85, which at the time was all about modernism. To counter that I started investigating the opposite direction. From the get go I reinterpreted my subjects. Why are Adam and Eve depicted as white people always in Western culture? That doesn’t make sense. Stuff like that I like to turn around. It’s a simple approach but at the time nobody was doing it.”

His queerness is another element that resonates in much of his work, even if it is generally up for interpretation.

Frans: “I’ve been aware of being attracted to men from the age of three on. Your sexual layout has such a massive impact on how you look into the world. For me guys with beards have always been a turn on, it is reflected in my work. I have a vivid memory of this guy that passed me on the street when I was six years old. The way his beard was, his buzzcut hair, the earring he wore.”

Is it a sexually charged memory?

“Oh yes. People sometimes tell me how they discover their sexuality at the age of fifteen or eighteen or even beyond. That is hard for me to imagine. One of my oldest memories is seeing a guy naked in the locker room section of a swimming pool that I visited with my parents. I had never seen pubic hair before. I fantasized about combing it.” Laughs: “Hell, I had no clue what it was for.”

Being aware of his attraction to men so early on also meant having to hide it for a considerable time, Frans tells. “It’s a secret that I carried around for some twelve to fifteen years. Whenever homosexuality is mentioned or hinted at I was aware: this is about me, and I would dive away. You live an asexual life until you are ready to come out. I think it damages people.”

How did it damage you?

He pauses to think. Then: “I suppose the notion that you have to hide parts of who you are in order to be liked by other people is a mechanism that you carry on into your life without even being aware of it. Some people feel so free to be who they are. Plenty queer people too. But for me, I think I’ve missed out on that ability as a result of hiding who I was.”

Frans lives in Amsterdam with not one but two partners, the third guy entering his love relationship with Rienus of over more than twenty years. Frans: “That too happened about five years ago. It was a challenge at first but we’ve found our way. It helps to not be too jealous. Polyamory is becoming more accepted but it has its particular challenges, society definitely isn’t adapted to it. When you book a hotel room for three persons, people get really confused.”

As it happens, Frans’ studio is right next to Amsterdam’s most notorious – and beautiful – cruising area De Nieuwe Meer. But, no, he isn’t tempted much, he states. “This horniness that I used to have when I was younger has settled down. I still have a keen eye for every hot guy that walks down the street, but the desire to act on it has become much less, thank goodness. Andy Warhol said frigid people get to do exactly what they want and I think he’s right. Not being distracted or corrupted by your sex drive really allows you to walk your own sovereign path.”

With corona disrupting expositions that were planned, Frans managed to finish sixteen sculptures last year. Exploring a new craft feels exciting, he says. “Even if I was by far the oldest person there in those artist residencies. People were commenting that it is so cool that I still develop myself. I guess they are right but it’s not something I give a lot of attention to myself. What matters to me is that it has opened up a new path that offers endless possibilities, it’s good to have that feeling again.”

He points to a spot in the studio that is cleared out. “I bought an expensive ceramics oven, quite an investment. But I figured that if I keep using it until I’m 80, it’s just five hundred euros per year. That’s pretty worthwhile.”

Do you see yourself going on for that long?

“Oh, definitely. The last time I was addressed as an ‘upcoming talent’ in a magazine was when I was 45.” Laughs: “I already thought at the time that it was quite a mature age to be an upcoming talent and it hasn’t happened to me since.”

In a way I suppose you could argue that you actually are upcoming, learning new crafts and techniques.

“Well, yes. The younger people during my residencies were actually ahead of me. They taught me a lot about their techniques. In return I could educate them about how to sustain yourself as an artist over a period of three decades. It was a really nice exchange in that sense. There is a lot of attention for young people in the art world, which is understandable and great. But people that get hyped early on, don’t always last. I’m very pleased that 35 years after graduating I’m still doing what I love, and to have all the skills that I acquired, while also experimenting and trying new things. I feel I can easily last another thirty years.”