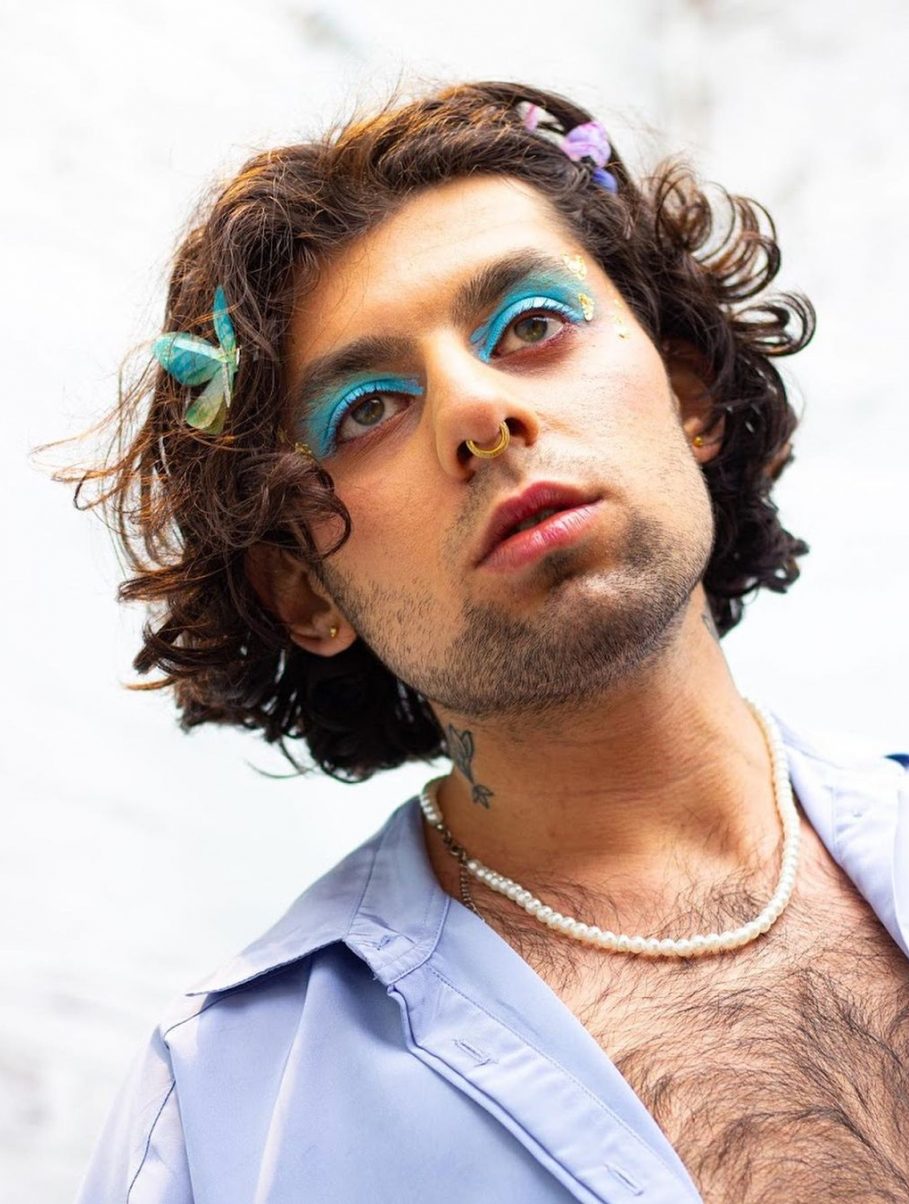 If you live by this idea of what you are supposed to be, will you ever actually get to be?”

Tano Rivers (22, rapper, musician) sits down on a bench by one of the canals in his hometown Utrecht, positioning his phone for our Zoom conversation, making sure his hair stays in check (it doesn’t). It is evening, the sun will start setting soon and Tano is out for a walk to start his day, as he explains, after finishing his day job delivering medical suppliances to clients.

Just last month, the day before our chat, he put the video online for his latest track Pleasure, a catchy and confident return to music after he found himself stuck with a writer’s block for almost two years.

“It’s hard to describe what I’m experiencing right now”, Tano says, a joint in his hand nearing its end. “I’ve been doing music for eight years now, I feel like I am a step closer to where I want to be.” He laughs, adding: “I’m going to be the biggest export after xtc that this country has ever provided!”

I’m actually inclined to believe you, given that you just released a lovely piece of music.

“Thank you, I appreciate that. I wouldn’t say it if I wasn’t really convinced. I suppose everyone wants to get to the top. For me though getting there is not so much about myself or feeding my own consumeristic mindset. Not to suck my own dick but I really want to shift the mentality behind today’s structure of what men are supposed to be.”

What do you mean by that?

“I’m talking about this idea of how men are not supposed to cry. Men have to be caged in into their own emotions and feelings, and then attach some sort superiority complex to that accomplishment. What I’m trying to say is that showing weakness and emotion actually is powerful. More powerful than thinking that you have to be something that you are not in order to be powerful. This is a shift in mentality that can open up so many worlds and people’s minds, men’s mostly. If you continue to live by this idea of what you are supposed to be, will you ever actually get to be? Allow yourself to grow forward, beyond this spectrum of masculinity that you were indoctrinated into believing in.”

I feel comfortable being me in the hiphop scene, which isn’t as accepting of queerness yet as it could and should be”

Which is, simply put, a limitation to what you are capable of.

“Exactly. It’s a limitation that will only cause more turbulence, more toxicity. And in a certain way it will be the biggest blockage to your own happiness. I truly believe that happiness is not a result from the things we define ourselves by, happiness is made by the things that are inside of us. Which get to daylight when we see the spontaneity of a person. You can’t truthfully be yourself when you have to run by some filter what you can and cannot do, have it dictate how you are supposed to act in certain situations. I’m looking for a shift in mentality where men won’t be judged for showing weakness but by how open they are towards themselves. How much they allow different perspectives to be around, how much love they can give to other perspectives even if these aren’t their own thinking or what they were taught to believe.”

Does it feel vulnerable to show yourself the way you do in your video, wearing make up, displaying a femine side?

“Yes, definitely. It’s vulnerable because I’m consciously taking the step to show this side of myself. I will not contain myself within that box that is held up by other people’s judgement of what a man should be. I’m hella proud of what I am and who I am, and it’s something they don’t get to define. The upside to this is that it actually makes me feel powerful that I have this strength to be myself in spite of other people’s judgement. That I’m able to be proud and have pride in dressing myself the way I want to, expressing this feminine side that I love. It makes me feel that I’m in touch with myself. And that’s the whole point. People forget that this shit is about being in touch with yourself in a society that tries to disconnect you from parts of yourself. If you can stand up to that, there is power in that. I feel comfortable being me in the hiphop scene, which isn’t as accepting of queerness yet as it could and should be. I’m teasing, persuading people to join me in a more open and less hateful world. You don’t have to like what I put out, but one thing is for sure, you’re going to have to respect it.”

Our conversation is in Dutch for most part, but every once in a while Tano will gear up and burst forward in English, just a few beats shy of the rapper taking over completely. Don’t let his generally laid back demeanor fool you, on stage this guy accelerates to deliver poetry and energy in equal measures.

“I started writing before I started rapping”, Tano says. “In the video you see me in a room that has papers pinned to the wall. These are actual texts that I wrote at the age of thirteen about whatever I was battling with at the time. It didn’t have much structure, it was free expression. I was working on being able to articulate what was in my head, in a way that I started to understand myself better. Music came later on, when I started making beats.”

What caused you to have a writer’s block?

“I suppose I was trying too hard. It was a real struggle because up until that moment music had always come to me effortlessly. All of a sudden I got stuck in my head. I wanted to say this and I wanted to say that and I realized that I might as well quit writing because it just wasn’t happening. When I started freestyling again I managed to reconnect with a different source altogether. I’m channeling stuff now that has such a sincere energy because I’m spitting it in the moment from the bottom of my heart. It’s how Pleasure came to be, which is the first song I wrote after the block.”

What was the block about though?

“Oh man. Sometimes you are your very own block. I had all these demands and expectations. Expectations tied to what I thought my capabilities are, and what I felt I deserved because of them. A whole lot of entitlement rooted in a lack of self acceptance and selflove. When you don’t really care about who you are as an individual but are focussed on what you should do, the results you should get, the success that should be yours. In the end nothing worked out, everything felt miserable. I was critisizing myself and everything I did, it was never good enough. This idea of I deserve this, I deserve tha… Nobody deserves shit! We’re on this fucking ride of life, you do what you have to and wether it will be a success, you’ll just have to wait and see. Put yourself behind it with full force and the best of your capabilities.”

I felt that watching your video. You are emerging as an artist, your video has its first thousand views. Wether it will climb up to hundreds of thousands or millions: it’s such a dope video that you can be so proud of regardless.

“Exactly. As long as the internet will exist, this video will be there as a result of a bunch of crazily talented people assembling around me to make this happen. I’m so fucking grateful for it. The universe has us on a path that we don’t have any control over. I’m not going to bed tonight thinking I will wake up tomorrow to millions of views. No, tomorrow I’ll go to work and probably talk to a whole lot of sick people. And then go back to my thing, which is music.”

And by sick people you mean…

“Hahaha, actual people with illnesses, yes. You would be surprised how nice people are, even if they are dealing with shit. Today there was this father who has his newborn child on tube feeding, assuring me that everything is the way it should be. He said that no matter what illness she has, he will still love her with everything he has. It had me thinking about unconditional love. I apply it to this track and video that I loved from the moment it was conceived, regardless of what happens next.”

How did you manage to break the block?

“It happened when I accepted that I was hating myself, and that I wasn’t even half as far in life as I thought I was in my head. I started being okay with not being okay. At that moment a wall of insecurity broke down. I could look around at the mess that I was and be content. With that came space, and in that space I could start creating again. Making music that made me feel really good. Like: this is why I used to like my stuff. I’m starting to understand real time where I am and who I am and be content. That’s really all that matters.”

By now the sky behind Tano has set to an indigo blue, the silhouette of his face carved out in black. He starts talking about his parents who migrated to the Netherlands from Turkey, both at the age of 18.

“Ultimately what I’m doing I’m doing for them”, he says. “I want to give them everything that they never had and always struggled for. Give them full freedom to do whatever they desire for the next however long the two of them may live. Six years ago all of a sudden their relationship started to blossom. They fell in love with each other. Damn. They used to hate hate each other, that was some traumatic shit in my youth. As a kid I wished for them to divorce. Now they have fallen in love like I never expected two people could fall in love.” Laughs: “A love I wish I had with somebody. They used to be sceptic about me pursuing music. They support me now but as it happens they have not yet been to any of my performances and I haven’t shown them the video yet. I’m not sure what they will think, though they are quite progressive. But in the end, even if they don’t agree with my choices now, once they will see what I had in mind, they will understand.”

What can we expect next from you?

“I’m lucky to attract some amazing souls and super capable musicians around me who create vibrations that amplify what I’m about, as well as what the Utrecht hiphop scene is about. The next track that is coming up will have your ear buds shake and will make you feel like walking around in paradise on a high.”

Which is something you don’t want to miss out on, obviously