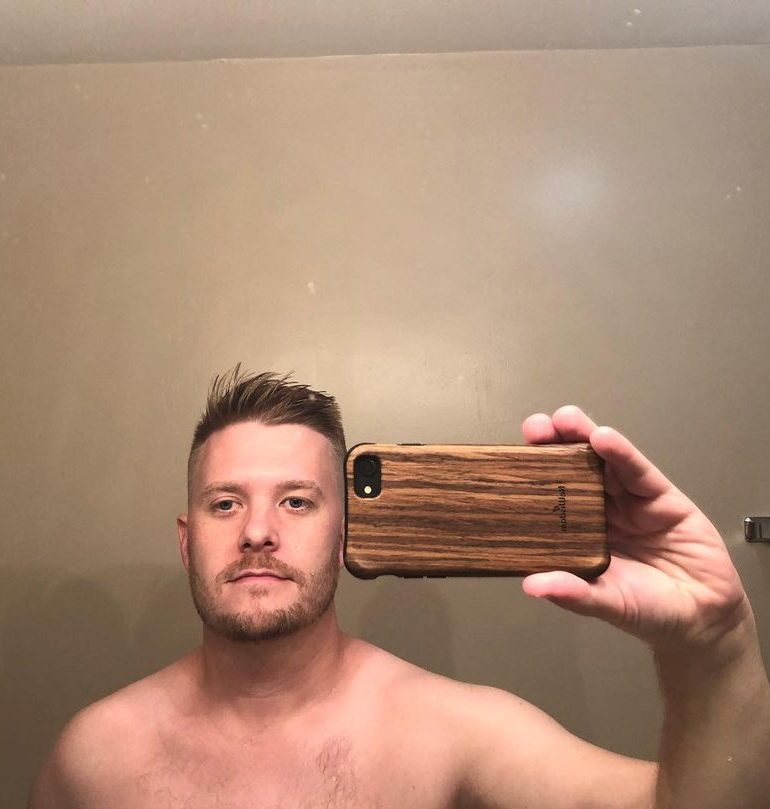 That ‘hi’ you sent him on Grindr, nine times? ADAM SHENK turned it into musical gold

Looking for nasty tops to use my shitty hole at Ritchfield Jersey Motel tonight? That’s a maybe.”

Probably everyone who ever was active on Grindr has had that one person that keeps persisting. Sending you a ‘hi’ for the ninth time, regardless of you ignoring them the first eight attempts.

Annoying? Not if you are singer Adam Shenk (38, from Harrisonburg in Virginia, USA). He even turns messages he receives from spambots into musical gold on his Instagram account Pop Grindr.

What about Hey you should swing by and pound me man had you thinking: this should be a song?

“The idea kind of just popped into my head at some point when I was procrastinating some other stuff. I used to already sometimes make screenshots of funny Grindr messages and post them on my insta stories.

“I’ve done musical comedy in the past where I would take something funny and turn it into a song. When the idea came I got really excited and within two days I had the first track up.”

How long does it take you to produce one song?

“It depends a bit how fancy I get with harmonies and vocal effects, but usually between two to three hours. Some are more quick than others. For 2 of us at the Swan Motel on Route 1 in Linden I used a banjo loop that comes with the software I work with. That one was done quite fast.”

Did you go though?

“Haha, I did not go to Swan Motel. A follower sent me a picture of the motel and it looks exactly how I would imagine. It makes me wonder what kind of hotel it is. Do a lot of people hook up there? Do the ‘2 of us’ live there?”

Have you ever replied to one of the guys that you recorded them a song?

“No I haven’t, I’m not sure what their reaction would be. I don’t think I could find the original messages anymore.”

The tracks are very well executed, you are a really good musician…

“Well, yes. Although right now with covid work has pretty much dried up. I’m a singer, piano player and band leader. I performed on a cruise boat for several years traveling the world, which was quite exciting. It was fun to open up Grindr in all these cities and see how the vibe on there is different everywhere.”

Do you have enough ‘material’ to keep us entertained for the year ahead?

Adam starts browsing some of the screenshots he keeps in a folder: “A lot of people think I make songs from screenshots that others send to me, but for now I insist on only using messages that I receive myself. Oh, here’s one: Looking for nasty tops to use my shitty hole at Ritchfield Jersey Motel tonight.” Laughs: “That’s a maybe.”

Not much in a top mood lately?

Any musical genre that springs to mind here?

“I’m thinking this could be a ballad, Sara Bareilles style. Or even country. Country music tends to be heartfelt and earnest, it could be a funny way to go with it.”

You don’t shy away from the more explicit themes, do you?

“Haha, no, I like to have a mix of stuff that’s really dirty and stuff that is more innocent.”

What plans do you have with Pop Grindr, what would you like to happen?

“Initially I saw it as fun exercise to get even more comfortable with music software and recording myself. But – and I kind of hate to say it – there’s always part of me that hopes one goes viral. The responses I get from people are really nice, it’s what keeps me going.

“Another thing I’m thinking about is doing a live show at some point and perform these tracks in front of a live audience. Lengthen some of the songs a bit.” Adam starts clapping a rhythm and sings: “Hey, wanna give me a load? Imagine everyone singing along to this, I think that would be amazing.”

Apart from fooling around with Grindr messages, Adam recently released a lovely track called ‘Back to paradise’.