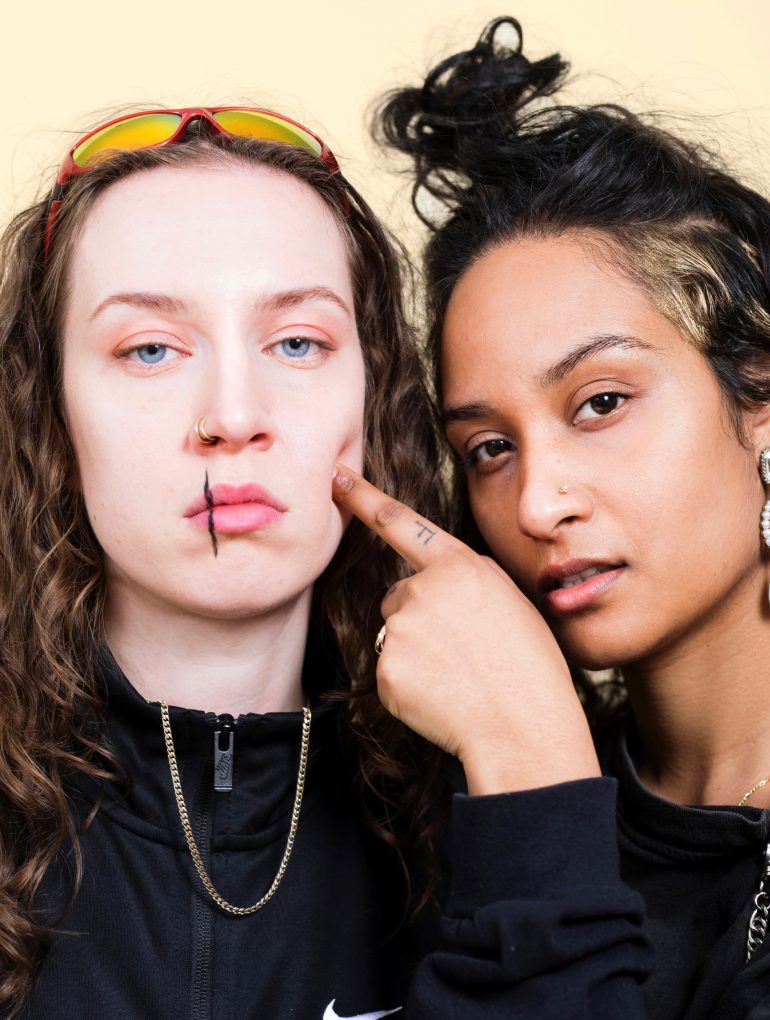 We tend to take it over the edge a bit, but exactly that is the essence. If we’re not pushing those boundaries, we might as well not do it at all.”

It’s quite rare to find an act that has you eagerly anticipating what they will come up with next. Queer lesbian rap duo LIONSTORM is exactly that.

Even covid cannot stop Vuige Muis and Skerrie Sterrie (they prefer to not have their real names and ages mentioned) from rising.

Lovers since five years, making music together since two years, they are now being invited to perform on national radio and tv. New stuff was recently announced, with not one but two EP’s scheduled for release – ooh yeah.

Not the kind to sit around and wait for the world to start turning again anyways, they also ran a gig selling socks. The imprint on them is referring to their current track WTJMDZ. Spelled out in Dutch: wacht tot je m’n dick ziet; wait ’till you see my dick.

Which, naturally, has us interested. We discuss the matter over tea.

What’s the idea behind WTJMDZ?

Skerrie: “It’s about a certain feeling of being allowed to be showy and dirty, and sexually explicit and aggressive in your flirting. A bit like Hef, this Dutch rapper, walking around in his robe and slippers while not having showered.

“I think it’s sexy and cool and it’s something we both relate to. We like being that person and find it attractive in another woman. But we never saw that depicted anywhere.”

Vuige: “I guess you could say it’s about big dick energy, which is the energy we take up on to stage.”

Skerrie: “Literally. For our gigs we use a dick so big that it makes you walk with your legs wide apart. It’s fastened with a big chain, all quite intimidating.

“We used it for our performance in Tokyo as well. You would expect people there to be a bit more reserved when it comes to sexuality. But even older women were giggling and jumping when they saw that huge cock.” (Laughs)

Did you take the dick with you on the plane?

Skerrie: “Yes. We don’t have a lot of financial resources so for our videos and shows we always have to think about how we can do things low budget and simple.

“We bought one of those bachelor party inflatable penises, cut it open and stuffed it. In Tokyo, we put in the duvets we found in our Airbnb and my jacket. We fill it with what’s available.”

Vuige: “The funny thing is that big dick energy apparently is a very recognizable feeling for women. It struck a cord with many lesbians who came up to us about it.”

Skerrie: “We do know how to tell a story. And we realized our first video needed to look good if we didn’t want to fall into a niche.”

Vuige: “For certain artists a very lo fi video would work, but not for us.”

Skerrie: “As a queer act we already run the risk of not being taken seriously. Our lyrics and content are shocking to people, we have to balance that out with something that is visually pleasant. We want to achieve that even if you’re not actively searching for queer content, you could come across our music.”

Vuige: “Besides, the hip-hop music that we love often comes in a very slick style. We wanted that, but a gay take on it.”

You don’t shy away from topics in your lyrics, talking about lesbian sex, sexism, menstruation.

Skerrie: “We always feel slightly uneasy whenever we release a new track into the world. Not at all while producing, we tend to take it over the edge a bit. But exactly that is the essence. If we’re not pushing those boundaries, we might as well not do it at all.”

When it comes to women, it is usually all pink and flowers and cuteness. We relate to filthy punk”

You have spoken about censorship and having your content shadowbanned. Do you adapt to that when you put out something new?

Skerrie: “It’s almost pointless to put time and effort into creating something that is really edgy and queer. Even if that is what we love ourselves.

“Especially when it comes to women, it is usually all pink and flowers and cuteness. We relate to filthy punk, but that is seen as very offensive, it gets reported all the time. So we try to do it in a different, more suggestive way.”

Vuige: “It’s frustrating though. Precisely what we want to add is what we have to censor. If we are too sensual with each other, it will be reported. When we pose without that sexual charge, people think: aw, such lovely best friends.

“So what you end up with, is a not so innovative heteronormative feel. Even gays sometimes say they are shocked by our lyrics. Compared to straight rap, we are generally much milder, more poetic and tucked away. We hardly ever use a harsh word. Hetero love gets much more space to exist.”

I am very curious how you would present yourself without censorship. By all means, feel free to showcase it on W.A.T.

Skerrie: “I’m going to keep that in mind. What is our art if we don’t have to take censorship into account. It is important to not forget what that is, and to make it, too.”

How did the two of you meet?

Vuige: “At drama school I was looking for someone to direct my final production. A mutual friend pitched Skerrie to me, she thought we would be a good match. So we went for coffee and she ended up directing my graduation performance.”

Skerrie: “You were already curious about me before, right?”

Vuige: “I suppose I have a soft spot for dominant women. Skerrie came up to me and gave me a hand. I was interested in her right away, but she just said hi and her name and turned back around. That blew me away completely.”

When Vuige’s relationship ended, those feelings for each other came up all at once. Our first real date was super intense”

Skerrie laughs. Then: “When I directed her solo we worked very closely together for a month. We would spend every day at Amsterdamse Bos [a big park/small forrest just outside of Amsterdam, CP]. Just the two of us, having intimate conversations, sharing personal stuff, writing stories. We got to know each other in a vulnerable way in a short time.”

Vuige: “And I had to listen to her point of view, surrender myself to her critical eye. This division was immediately clear: she is the director, I’m the performer. It’s also reflected in LIONSTORM and in our working method.”

Skerrie: “In the beginning I was a bit on my guard. I had heard some stories about her – later on they turned out not to be true. But I tend to protect myself when I feel that something might not be right for me.

“She was still in a relationship at the time, so it didn’t really occur to me to expect anything anyways. Even though I thought she was very attractive and special.

“When her relationship ended, those feelings for each other that we had both stuffed away came up all at once. Finally that box could open: it was a huge explosion. Our first real date was super intense.

If you are dating and you start working together, you put both at risk”

“Vuige was still dealing with her love for another person. A relationship never completely ends immediately. You still love someone, you still cherish memories, you have to give up a vision of your future with someone, the routine the two of you had.

“Strangely though, even if to a certain extend I found it difficult, it was also nice to experience how she maintained a certain love for her ex, and how she was honest about it. It forced me to realize that someone can love two people at the same time. And that it doesn’t say anything about me if someone who loves me also loves someone else.”

How did your musical collaboration take shape?

Vuige: “At first we resisted that.”

Skerrie: “If you are dating and you start working together, you put both at risk. But the ideas kept coming, until it just didn’t make sense anymore to not start working on them.”

With just two songs out, you were already asked for showcase festival Noorderslag.

Skerrie: “Which we had never even heard of. A set at Noorderslag takes 25 minutes so we had to come up with new tracks. We were quite nervous, also because we knew there would be a lot of programmers and critics in the room. Before the show we were supposed to have ten minutes to soundcheck, when we arrived the hall was already packed.”

Vuige: “We had to do it with the audience there. But precisely that made the tension melt. We bonded with the people immediately.”

Skerrie: “The performance went well, the atmosphere in the hall was really good. And we were very happy with the reviews afterwards. We made it into the Top25 best acts.”

I read somewhere that it is your mission during performances to make the whole room gay.

Skerrie: “At the end of the Noorderslag show we joked that we had made everyone gay for a minute. Obviously that’s impossible but it made people laugh about a subject that had them uncomfortable.

“When we opened we called them filthy, asking the packed crowd if they were nicely shoved together crotch to ass.

“We want to make queerness a bit less of a taboo subject. When people realize we are not dead serious, you can feel them loosening up. It’s our playground out there, but they are allowed to fool around, too.”