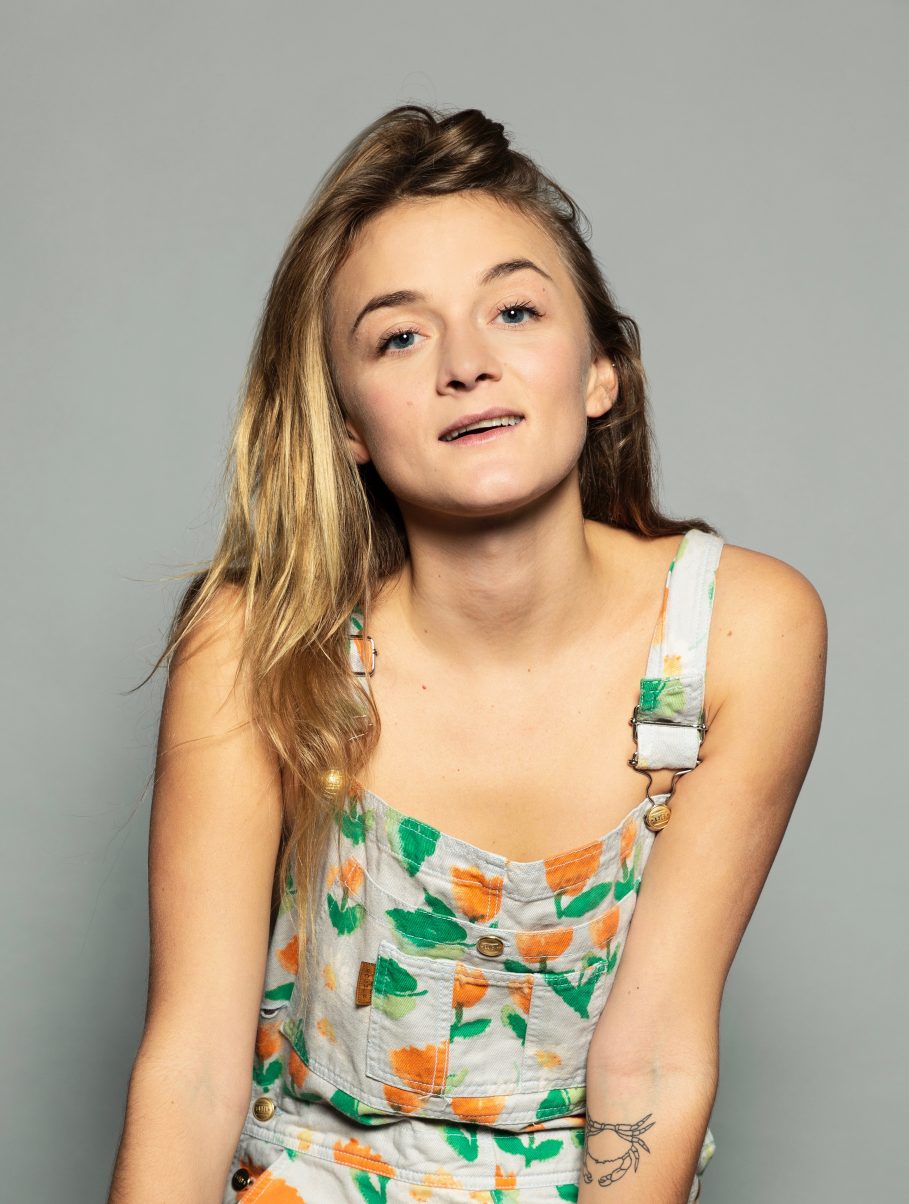 Maybe give MILOU DEELEN a break when she’s shitfaced, please

The Amsterdam journalist and writer will talk to you about feminism and activism. A lot. Just choose your moment.

Her boyfriend – yes, she’s with a guy now – sometimes asks Milou Deelen to show his friends another side of her personality than that of relentless activist. Upon meeting them for the very first time it was a matter of moments before the subjects of conversation were fat-shaming and feminism.

A chat with Milou has a tendency to go in that direction.

We are in an Amsterdam bar and she laughs: “Who cares? This is who I am and I’m proud of it.”

As a journalist, she writes hyperpersonal articles about topics that could use some more awareness and some less stigma. Sex and sexuality, the female body, inequality, shaming, queerness – you name it.

It felt quite powerful to be standing topless in the centre of Amsterdam. As if I was owning my own sexuality”

Please mind to not label her as an activist or feminist solely though. Milou is a journalist and a writer. Feminism and activism, she stresses, are not jobs.

A video that quickly went viral in The Netherlands some five years ago unintentionally launched her career. In it, she addresses the slut-shaming she experienced in her student’s association, including a song that you could ‘do her’ for a pack of cigs and a Smirnoff.

At age 26, she is considered one of The Netherlands’ leading figures in a new wave of feminism. Milou writes for several significant Dutch publications and is currently working on her second book.

Do you remember how you felt when you were recording this video?

“I remember being nervous when I put it online, but during the filming, I was mostly excited. Raising the issue of slut-shaming felt really right. I had built up tension inside for over a year, finally, I found a way to release it. Although it was weird shooting it on the streets of Amsterdam. With each shot, I had to stand still for about ten minutes to get it right.”

It must have been at least a bit unnerving to stand topless on Dam Square?

“Mostly because tourists kept shouting at me and filming me.” Laughs: “And it was very cold. But it actually felt quite powerful to be standing there half-naked. As if I was owning my own sexuality, which is exactly the message of the video. Plenty of tourists, by the way, were very supportive, they asked me what I was doing.”

You put the video online, and then what happened?

“I was in Groningen, where I studied, and was planning to go to school but my sister called me. She saw how many comments and shares the video was already getting and advised me to come home to our family instead. I got tons of reactions, hateful and supportive. My phone didn’t stop ringing all day. Friends, family, media. The video got picked up nationwide. I was very glad that I hadn’t stayed in Groningen, between the people from my student’s association I was speaking out against. I understood: this commotion confirms that slut-shaming is a topic that needs talking about. I didn’t sleep at all that night, the adrenaline was rushing through my veins.”

Do you ever stop to think about how much has happened in the past years?

“Not really. I mean, I know that my life is extremely different compared to 2017. I lived in my sorority back then, I didn’t write, hadn’t discovered feminism, and only dated men. Much has changed. But when people mention that my career really took off, I tend to downplay it.”

I’m receiving more love lately. Maybe because I haven’t been posting pictures of my menstrual blood in a while”

Did you consider that addressing matters like this could become your job?

“Not when I uploaded that video. I had no idea what I wanted back then and I certainly didn’t think about becoming a journalist. That video really saved me. Without it, I may have still been living in my sorority in Groningen and I’d probably be very unhappy. The mere idea gives me bellyache.”

Are there topics you’d like to address but haven’t written about?

“There’s a lot I haven’t written about, but racism I definitely find a difficult topic to tackle. What is my position within this subject matter as a white woman and how should I address it? I think contemplating that as a white person is a good thing though. It would not be quite right if I felt completely at ease with just writing whatever comes to mind.”

Has that awareness, of the exact words you put down on paper, increased since you’re more well-known?

“I don’t know about that, but I do feel a certain pressure that comes with doing what I do. Sometimes, when I see other feminists sharing stuff on social media, I’m triggered to respond to the topics as well. Even when I don’t feel like it – I spend enough time on Instagram as it is. That pressure can be tiring, also because I put effort in addressing these topics correctly. On some level, I’m afraid to make a mistake or to not be inclusive enough. Again, being aware of factuality and inclusivity is generally a good thing. But on the other hand, let’s please not move towards a culture of fear and not post things because you’re afraid you’ll be canceled for it.”

Another thing that comes with what you do is online hate.

“Definitely, but I feel like I’m receiving more love lately. Maybe because I haven’t been posting statements like pictures of my menstrual blood in a while, I’ve been focussing mostly on becoming a good journalist and doing interviews.”

But you have had your fair share of awful reactions to your posts.

“To the point where it made me feel unsafe. For instance when people sent me: ‘I know where you live.’ Perhaps they don’t, but still, it’s very intimidating.”

When something bad happens I feel sad for a few days, cry a lot, and then just like that I feel a lot better”

In an interview with your mother, also a journalist, a few years back, she described you as a very resilient person who can process potentially traumatizing events within days.

“Yes. When something bad happens I feel sad for a few days, cry a lot, and then just like that I feel a lot better. I also become pragmatic: ‘Okay, what are we gonna do about it?’ Recently though, I am wondering if that means I genuinely processed something or if I just believe that I did. I do actually feel happy again – it’s not an act – but I’m not sure whether it’s healthy to move on so quickly. I’m glad I’m able to digest negative experiences relatively easily, but sometimes these events come back to haunt you later.”

Your first book, Krabben [in English: ‘Clawing’, TvE], which you wrote with journalist Daan Borrel, is about women who ‘use their claws’ to tear other women down. Do you experience other women being intimidated or offended by your work?

“Actually, there are quite some people who feel a need to point out that someone they know finds me annoying. I don’t care – that someone does not know me. They base themselves upon what I write or how I present myself on Instagram. Quite often these persons are women. Don’t get me wrong, there is no group in which nobody judges others. But it’s more likely marginalized people who ‘claw’ each other down because generally, for cisgender white men it’s easier to help each other get higher up without risking their own position. For women, that’s different. There are fewer places for them in the work field. A lot of women are afraid to support other women because they think they might jeopardize their own careers. Hence, we tend to judge each other instead.”

Your second book is on its way. What is it about?

“More than half a century has passed since the sexual revolution, I research the progress we made since then. Small spoiler: not that much. There is still a lot of inequality and a lot of work to be done. From orgasms to sexual education to rape – we’re not where we should be as of yet. But what can we do to get there? Like I said: I become practical quickly.”

Milou met her boyfriend Seb after he sent her a DM on Instagram, telling her: ‘I read your book and I am wiser because of it. Thank you.’ Seb was vacationing with friends. A few of them were reading Krabben and advised him to read the book. Not just because he showed interest in the topic, but also because they were teasing him that he and Milou would make a great couple.

My boyfriend isn’t a typical straight man. He has the word ‘fem’ tattooed on his leg”

You identify as queer. Currently, you are in a relationship with a man, for the first time in years. Are you getting the ‘Was it just a phase?’ remarks?

“I didn’t expect to fall in love with a man again. When I was single I had sex with men, but I was mostly interested in women. But then there was Seb. When we got together, I often heard: ‘I knew you’d end up with a man!’ That screamed heteronormativity. Romantically, I’d only been with women for five years. It is kind of weird to be seen as a ‘straight’ couple now. Seb isn’t a typical straight man by the way. He wears nail polish and has the word ‘fem’ tattooed on his leg. He’s very feminist and I think that’s really attractive.”

You once said you don’t believe in substantial differences in character between men and women. Do you experience a difference in relationships with a man and with a woman?

“I really don’t. Well, on a sexual level I noticed biological differences. Otherwise, no. It’s not that I don’t want to acknowledge it, but I’m really not able to point anything out. What is a difference, is that when I was together with a woman, we got asked shamelessly how we were planning to have kids together. That hurt, because I didn’t know the answer to that question myself.”

When you’re at a party, do people keep coming up to you to talk about serious subject matters?

“That happens a lot! It’s great that people, especially women, feel comfortable and safe enough to talk to me about their sexuality for instance. But when I’m shitfaced at 4:30 am, I don’t always necessarily feel like having deep conversations.”

Ah! So there is a not-so-serious side to Milou Deelen after all?

“It would honestly drive me crazy if big topics were all I discussed. I talk shit or crack jokes like anyone else. But if you spend enough time with me, we will end up speaking about important matters. These topics and I are simply inseparable.”

About the pictures: there’s a lot more Roeltje van de Sande Bakhuyzen where that came from!