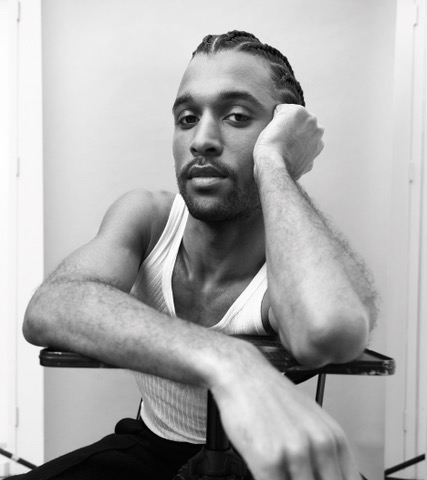 The Amsterdam singer (27) used to not like his voice because it sounded feminine. Now he’s going for a career in music.

“The singing has always been there. I pushed it away for a very long time because I wasn’t comfortable with it myself. It is very vulnerable. In my music I give way to both my male and female sides. That is not what was encouraged when I grew up. The society we live in doesn’t reflect it either.

As a kid, when I showed a part of myself that was more soft, more who I was, it got pushed down. ‘Act normal, don’t be a sissy, what you do is for girls.’ That gets in your head, it indoctrinated me. I started to think something was wrong with me. So I decided to ‘act normal’ and started mirroring the world around me.

For four years I did business school, the plan was to eventually work for a large multinational. At some point I landed an internship at one of the biggest luxury companies in the world, I thought it was going to be my dream job. And I didn’t like it. Deep down I knew what I wanted. Because in all the moments when I was alone, when no one could see me, I was myself. Dancing and singing along to Whitney Houston and other artists that I liked.

I remember whenever I heard my mom arriving home I would quickly shut everything down and run to my room, pretending I had been doing other stuff. I repressed myself.

Some five years ago I moved to Paris for six months. It was the first time I stepped out of the bubble I had grown up in. I got to know this amazing woman, Viola Renate, who at the time was part of the visual artists-duo Pinar&Viola. She took me under her wings and shared with me her Paris, and what life can look like if you approach it with an open mind. Paris and Viola helped me move in a direction I didn’t dare to go for a long time.

There was more going on, somehow ‘gay’ did not feel like the right label for me”

In high school it often happened that other classmates and sometimes even teachers called me gay or asked me if I was gay. For some reason it internally never rung true. Yes, I was interested in other guys. But there was more going on, somehow ‘gay’ did not feel exactly right.

The queer umbrella, that space which allows you to be whatever you want to be, was something I long was unfamiliar with. Instead, I was looking for who I wanted to be, so very eager to know if I was gay or not.

Viola asked me: ‘Honey, why are you so focused on knowing if you are gay or not? Aren’t there many more options available? Why don’t you focus on finding out who you really are instead? Maybe you are interested in men, maybe in women, maybe both, maybe neither.’

It was a revelation to me. I realized that my obsession with finding out my sexuality was actually copied from the world around me that was constantly asking me about it. I stopped obsessing over it and started my journey inward. Where I am today resulted from what was ignited at that moment right there in Paris. I started living my life for me.

People still ask me if I am into men or women. When I’m asked respectfully the answer is: I identify as a queer man, I am capable of loving everyone if the energy is right. Over the years I have come to learn that it’s not one’s gender that I am attracted to, it is the content of someone’s soul that has the power to draw me in.

The interactions I’ve had with men brought me so much, I learned so much about myself”

To show myself in the video for Only you intimately with another man is a conscious choice. This is who I am, I’m not ashamed of it, I embrace it. I could have emphasized the part of myself that is into women. In my community, often when people are queer but straight passing, they hide behind that. A lot of men choose to keep it on the low.

The interactions I’ve had with men brought me so much. I learned so much about myself and I am so grateful for it that I never want that to exist in the shadow of my own life. It needs to be something normal. In order to live a full life, you must be able to love whoever you want. Or you will suffocate.

That is actually what Only You was about to me when I wrote it. I was hanging out a lot with guy and found myself unable to express my true feelings about him. I was mad about the boy and not being able to share that with him – out of fear – drove me insane inside.

Playing the piano triggers my deepest emotions. Without warning I start to sing about stuff that lives deep beneath the surface. One of those things was him, and the situation I found myself in with him. That’s why I am so grateful for music in my life. It is my therapy and helps me deal with many things in a magical way.

For the video of Only You I reached out to photographer and filmmaker Kevin Osepa. I wanted it to be about BIPOC queer intimacy, made by people from that same community. In the creative process I stumbled upon the work of American photographer Clifford Price King, another youngster our age who knows how to capture black queer men and intimacy like no other.

After some Zoom sessions with Clifford, Kevin and I decided to use his work as the main visual inspiration for Only You. I wanted the focus to be on the intimacy between me and my counterpart and steer clear from making it too sexual. Simply because we live in a world in which sex sells, and therefore is being promoted most. But in my own life it’s intimacy that comes first and what I value most.

I made the conscious decision to not yet put Only You up on music streaming platforms such as Spotify and Apple Music because I don’t want people to enjoy the music without watching the visuals – the visuals are too important. I need the world to see us. BIPOC queer intimacy, not just sexuality, must be normalized, and in order to make that happen it needs to be seen.

The creation process of Only You has thought me so much about my queer ancestors, myself, and the man that I am becoming. There are still so many untold stories that live within me, and slowly but surely, they are finding their way out through my artistry. Without ever forgetting that little version of myself that was dancing in the living room and was scared.”

More beautiful stuff to be expected, come keep up with Yazija